After the First World War was over, the Municipality was disbanded.In 1952, the Municipality of Cestica joined the village Gornje Vratno. In 1993,  during the War of Independence in Croatia, the Municipality was  reestablished . The first Mayor in Cestica afrer Croatia created was Dražen Zebec. After his resignation, Mirko Korotaj took his place.  After his term ended, Vjekoslav Klasić became mayor. During the last elections,  Mirko Korataj was elected mayor once again.

Flag of the Municipal of Cestica

Worshipping of the Holy Cross  is the main event of Cestica’s centennial celebration on September 14th.

In 1997, the Municipality of Cestica government agreed to create its own coat of arms and flag. 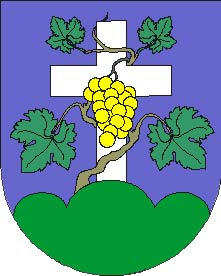 Description of the coat of arms

On the blue background there are three small green hills located at the bottom. On the centre hill, there is the silver cross surrounded by grape vines growing around it. In the middle of the cross, there is a bunch of golden grapes partially covering the cross.