Geographic position of Varaždin county is determined  by its natural position and economic environment. Located almost at the heart of Europe where natural and economic units meet, near Panonia and the brink of Alps, with the centuries old influence of Germanic culture. It lies close to densely populated and naturally rich central Europe, economically developed belt of central European area, which stretches to the Adriatic coast and emphasizes importance and significant opportunities of the entire economic and geographic position of Varaždin county.

The very position of Varaždin county in Croatia emphasizes the importance and advantage in a wider European area through traffic linking west and central Europe,  southeastern Europe and Middle East, and the line towards central Danube region, Adriatic, Mediterranean and exit to the world seas.  Varaždin county is located at a very favorable location with geographic benefits which in past had been a significant factor in social and economic development. 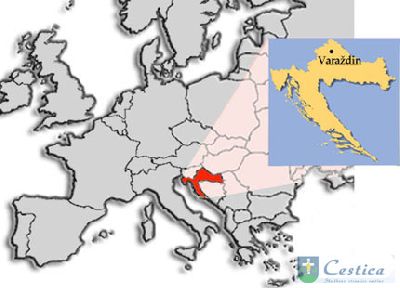 Picture 1. The position of the Republic of Croatia in Europe

Varaždin’s surroundings make a frame worthy of a baroque town. The preserved green landscape, river Drava and a lake are ideal for hunting, fishing and recreation. Hunting grounds in Varaždin’s surroundings are well known and liked among the European hunters. Town’s immediate and wider surroundings are a true challenge, from Ludbreg sanctuaries, thermal waters of Varaždin spas, Pavlin complex in Lepoglava, Ivančica, vineyards Cestica, Ravne Gore to an old castle Trakošćan. All the above enables development of health, recreational, rural and sports tourism.

The Varaždin county is situated at the borderline of Panonian area, and is characterized by three relief areas: plain in the central part, hilly with mountain massifs in south and west parts. The county has a moderate continental climate characteristic for peri-panonian brink. The agricultural lands, mineral and water resources are basic natural resources of Varaždin county. The county spreads across an area of 1.228 km2, which constitutes a 2,2% of total size of the Republic of Croatia. On the territory of Varaždin county, 6 towns and 22 municipalities were established representing economic, transportation and social unity. One of those municipalities is municipality Cestica.

Picture 2. The position of Varaždin county in the Republic of Croatia

The municipality Cestica is located at the utmost north-west part of Croatia, its one part covering the tamed vineyard hills and the other located in the fertile plains with until recently fickle river Drava, on the size of 46 km2, i.e. 3,85 territory of Varaždin county. It has a population of cca 6.000 inhabitants in 20 settlements. The inhabitants are mostly Croatians, Catholics and farmers.

From east and south side it borders with municipalities Petrijanec, Vinica and Donja Voća, and on west and north with neighboring Slovene municipalities Zavrč, Gorišnica and Ormož. The name Cestica is related to an ancient Roman traffic road Ptuj-Osijek. 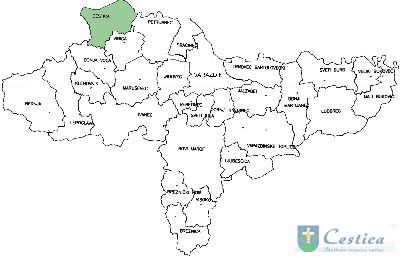 Spatially, the territory of Cestica municipality has 4 characteristic units. Those are: areas along Drava, plain agricultural area, linear line of settlements along the main traffic road from the state border to the border with municipality Petrijanec and a hilly landscape with mixed settlements, vineyards and forests, and valleys with brooks. A combination of fertile plain of river Drava and vineyard hills gives a special quality to the municipality, as well as the possibility of simultaneous intensive usage of agricultural land and vineyards, forests and meadows on the hilly part.

The traffic position of the municipality is rather favorable, although it is situated on a state cross-border. Passing through is one of the key traffic directions: the state road D2 (Slovenia – border crossing Dubrava Križovljanska – Varaždin – Virovitica – Našice – Osijek – Vukovar – Ilok – Serbia and Montenegro). Furthermore, construction of a fast road, the so-called  „Podravska magistrala (highway)“ is planned for near future, which will be passing through the plain area of the municipality, and which will be directly linking Austria through Slovenia with highway Budapest-Zagreb. It should be emphasized that the mentioned Podravska magistrala will be passing through Economic zone Cestica. 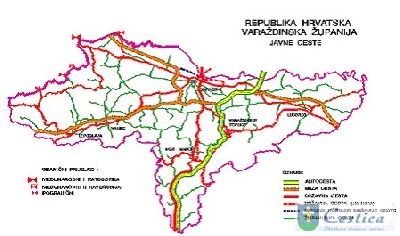 On the territory of municipality Cestica, there are two international border crossings and one boundary crossing towards the Republic of Slovenia. The first is Dubrva Križovljanska – Zavrč, which has a status of a permanent international border road crossing of I. Category, and the other one is Otok Virje – Ormož, with a status of a permanent international border crossing of II. Category, while the boundary crossing Križanče – Drenovec is located on a 3-border point area of municipalities  Cestica, Donja Voća and Zavrč. According to data by the Border-crossing Police station Varaždin, during the first 9 months of 2004,1.553.651 passengers and a total of 464.840 vehicles passed through the Dubrava Križovljanska border-crossing. During the same period of time, a total of 560.412 passengers and 100.512 vehicles passed through the border-crossing Otok Virje.

Within the state, the municipality stands out for several characteristics. Cestica is the most north-western part of the Republic of Croatia. Its longest border, from its west and north side is with the Republic of Slovenia, 18 kilometers long. A part of Ormoško lake is on the municipality’s territory, which serves as accumulation for hydroelectric power plant Varaždin. It is a part of a system of Drava hydroelectric power plants.

„Gospodarska zona Cestica“ (Economic zone Cestica), on the basis of a new physical development plan for Cestica municipality and the decisions taken by authorities, has become a joint name for three locations with planned business activities. The first and the most important location is marked Location A and is located in Otok Virje and partly in Virje Križovljansko. The second location is Location B and is located in Babinac, while the third location is Location C and is located in Dubrava Križovljanska. The markings indicate the schedule of priorities for communal construction and construction of business objects. 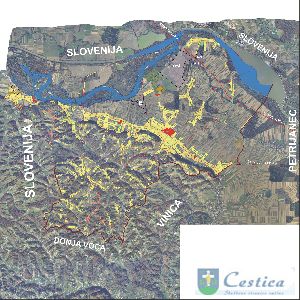 Picture 5. Orto-photo overview of Economic zone Cestica with Locations A, B and C

Location of business zone in Otok Virje and Virje Križovljansko, marked  Location A, is a part of Economic zone Cestica, and as such represents a part of area which is the most developed and equipped for the immediate reception of entrepreneurs and their investments. Location in Otok Virje is 100% owned by municipality Cestica, and we can view it as two separate parts (marked  A-1 and A-2), while the location in Virje Križovljansko is owned by the state  (marked as A-3).

Part A-1, as an integral part of Location A, is located east from the future fast road, the so-called „Podravska magistrala”. This area consists of four parcels, an access road with a communal infrastructure (water, electricity, and telecommunications) and a substation. Parcels 1 and 4 are privately owned and the construction of objects is about to start, while parcels 2 and 3 are being sold. The size of the parcel number 2 is 9961 m2, and the size of parcel number 3 is  13423 m2. 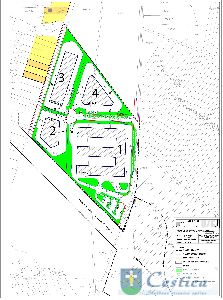 Picture 7. Parcels within Location A-1

In Virje Križovljansko on both sides of the county road Ž 2028 between  Križovljan grad and Otok Virje, a new part of economic zone on Location A is planned, which is separated from Križovljan grad with a very valuable agricultural land, so as to avoid negative impact of economic zone on a possible development of tourist recreational and economic facilities in Križovljan grad. Distance from the residential settlements enables an undisturbed development of the zone and settlements located in the vicinity. Traffic wise, this zone has a good connection with the existing border crossing over the county road and an excellent possibilitiy of being connected to a new border crossing and planned fast state road (Podravska magistrala). Its objective is to, together with the planned zone in Otok Virje, enable development of industrial and warehouse-transportation economic activities in vicinity of the new border crossing as the economic originator of municipality’s development. The total size of this location is cca. 500.000 m2.

Locations B and C are areas of second and third priorities and as far as communal infrastructure, there is traffic connection. It should be emphasized that the parcels in these areas are mostly privately owned, except for zone B, where a certain part of parcel is owned by municipality Cestica. Repurchasing of land by interested investors will be supported in these locations.

·        However, respecting all the natural beauties mentioned when describing the municipality Cestica, and all the positive regulations and laws of the Republic of Croatia and EU, environmental protection comes second.

·        In regard to long time business of traders and entrepreneurs on the territory of municipality Cestica, the intention is to use the existing resources in combination with foreign partners who will, with local businessmen, invest in partnership.

If we consider all the above mentioned, we can outline the activities which are desirable in the economic zone: metal working industry, woodworking, production of electrical-materials, production of plastic and glass products, catering-tourist, leather shops, food and beverage production, assembling and production of parts for automobile industry.

According to the basic groups of professions, the unemployed persons recorded by the Cestica Branch office of the Croatian Employment Institute can be divided into the following groups:

·        Catering and commercial professions – total of 85 of whom 63 women: cook, waiter, baby sitter, hairdresser, salesman, deliverer, security guard for the objects and surroundings...

They pay 75% of the regulated tax rate in 3. category area.

An exception to provisions of the Law on Real Estate Tax (for transactions and acquiring of properties located in the areas of special state concern, real estate tax is not paid in case when a private entity, through purchase of property, registers or changes the residence within that area.

Tax from Para 1. of this Article is not paid by legal entities who sell property in the areas of special state concern and which will continue to serve for business purposes.

Tax from Paras 1. and 2. of this Article is not paid if the property is abalienated or the business discontinued, or if the resident changes the residency outside the area of special state concern within 10 years of the day the property was acquired.

The Ministry of Finance – Customs Administration verifies the list of equipment and parts upon previously obtained opinion by the Ministry of Development and Renovation.

The Ministry of Finance – Customs Administration processes the request and the proposed list and prior to verifying it, obtains the opinion from the Ministry of Development and Renovation.

Municipality Cestica additionally stimulates the economic activity in its area, and thus provides for the following benefits:

o      Exemption from paying communal fee if the construction is finalized within 2 years of signing the land sale contract (amount of 10,00 kn/m3),

o      Additional discount on price of land if there is a possibility for works to be performed by the companies from Municipality Cestica.

o      Possibility of reducing the price of land under condition of hiring workers from Municipality Cestica.

Traffic connection – distance in km from: 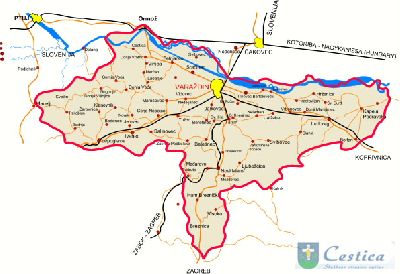 The area of Economic zone Cestica is managed by a commercial company „Gospodarska zona Cestica d.o.o.“, of which municipality Cestica has a majority ownership.